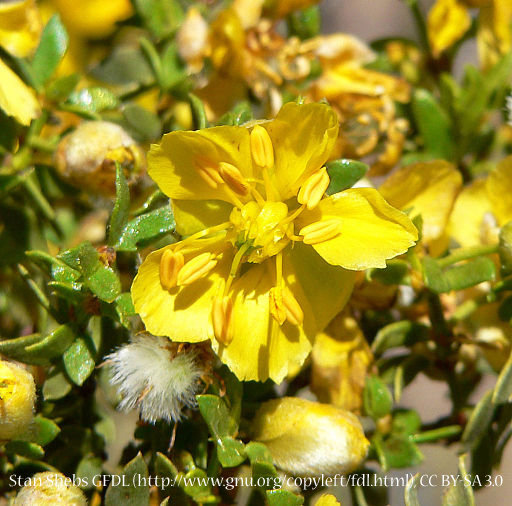 Creosote Bush, Larrea tridentata, is a hallmark species of the Southwest, but is an often overlooked, but fantastic shrub for properties with some space. This species is excellent at stabilizing loose soils. If watered deeply (but infrequently,) it can remain very green, and can be shaped any way you wish, or left in its natural state.

Creosote is a medium-to-large evergreen shrub and has numerous flexible gray stems with black rings projecting at an angle from its base. It is usually less than 4 feet high, but can grow to 12-foot heights with abundant water. Its small pointed, yellow-green leaves have adapted to conserve water and dissipate heat extremely well. The bush may lose some of these waxy, resinous leaves during extreme drought, but never loses them all. It can be found in areas with well-drained slopes and on plains, especially those with a layer of caliche, up to 4,000 feet.

Creosote sends out underground runners, which grow into clones. Clones are plants that are exactly like their parents, and Creosote bush forms rings around itself. Even though the bushes in the outside rings are newer than the ones in the center, they're really all the same bush.

In one area of the Mojave Desert grows a creosote bush called "King Clone." It's "ring" of offspring, thought to be the oldest living plant in the world, dates back some 11,700 years.

One inch-wide twisted, yellow petals bloom from February through July, and are highly dependent on elevation and water availability. 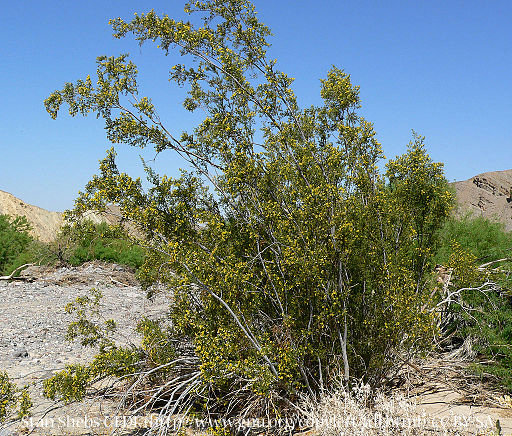